Such a pity. Especialy when you've run the best event a week before this race. IPNM 2018 is no where compared to SCKLM 2018. Not even a little bit.

Few hours before the race started, I went and collected my race kit at Dataran Mahkota. The place looked terribe with all the fence, flags, tables and even few tents was damaged due to the heavy rain and strong wild wind. The volunteers was trapped under few tents. Cold and shivering. Kesian. Not sure if that is the reason of missing volunteers during the race.

Anyhow, I was happily checked in to the nearest hotel near the Puteri Harbour right after that.

Plan to finish my race in ngam2 5 hours as I know my body condition have not fully recover from SCKLM 2018. Its been a while I didnt do this type of back to back marathon. So, I better play safe and run at a slower pace if I want to resume my training the day after the race.

Anyway, the race venue was different from what I saw that afternoon. All the damaged was fixed. With the vibes, the fireworks, the drummers, well everything was great at first.

Fist water station was at 4km (-/+). That was ok. Then when I arrived at the first u-turn for full marathon, there was an empty table. I didnt suspected anything until it was nearly 11km after that, baru ada 2nd water station. And sadly, the FM runner have to share that water station with other runners for 21k & 10k? I saw one photographer was helping the crews as there were not enough volunteers. Tepuk dahi already.

At this point, I began to felt that this is going to be bad. I must prepare my mind for the worst. This remind me a lot like my Klang Marathon last year. Except that safety is not a concern here.

3rd water stations was placed at 13km. That was okay. 4th, 5th & 6th also okay. But come to 7th (at 20km), there were just few bottles on the table (less than 10 bottles) with no paper cup and no crew too. Teguk aje walau pun malu and tak suka share air macam tu.. hygiene issue maa.. hihi

And water stations is not an issue to me after that. All went okay. I even jumpa this genenerous cyclist offer me some water but I didnt need it. Thank you whoever you are.

After 30km, they served water in a new style. All mineral and 100 plus water was placed along the route until 38km! So, runners can easily choose what they want to drink while running whenever they want. If you want mineral water, just pick one bottle, and drink. Dont forget to close the lid and place it back tepi jalan for other runners pula.. hihi.

Anyway, I managed to finish the run as plan despite the water issue (4:59 precisely). But unfortunately, this will be my first and last run in Johor. Pity to those who treat this event as their A class race. 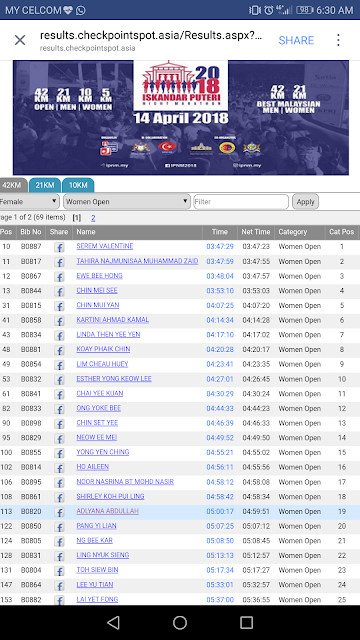 Posted by Outdoorfreak at 9:26 AM